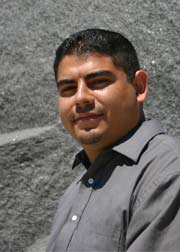 Christian Ayala is quick to admit he was intimidated by the prospect of taking Honors English 100 last fall. During his initial placement test, he did not qualify for English 100, let alone an Honors section. But after participating in Word Jam last summer, Christian not only passed his Honors English 100 class but he earned an A in the class and has newfound confidence in his academic abilities.

“Honestly, I spent most of the fall semester anxious and unsure of my abilities,” he said. “However, now that I have successfully completed the fall semester, I feel a sense of confidence. I believe I will have no issues furthering my education. The only thing I regret is not returning to school sooner.”

Christian graduated from high school in 2003 and returned to Cañada in the fall of 2011. He knew he had to brush up on his reading and writing skills so he participated in Word Jam, a free, one-week program designed to help students improve those skills. “It was an amazing program,” Ayala said. “I participated in Word Jam, scored higher on the placement test, and I was able to skip the remedial classes and start in college-level English.”

Christian works for a plumbing company and can’t attend school full-time so the ability to bypass pre-college English and writing was important to him. “I did not want to spend the time taking the lower level classes but I tested low in my initial placement test,” he said. “Word Jam taught me some new skills and helped me remember some of the rules I learned in high school.”

Professor Lisa Palmer said she would have never guessed that Christian did not initially place into English 100. “Christian’s story shows that some students just need a little review before taking placement tests,” Palmer said. “This validates the Word Jam program.”

Even with his successful scores when he retook the placement test, Christian did not set out to enroll in an Honors English 100 course. It was the only one with seats remaining when he signed up for classes. “I was left with no other option,” he said. “When Professor Palmer explained that there would be a 15-page research paper and that if writing didn’t come easy for you, you should drop the class, I was scared.”

The warning ended up serving as motivation, as Christian used the essay he had written for Word Jam as a template for his research paper. “I was surprised that I earned an A on the research project,” he said. “Cañada has really given me the sense that I can be a successful college student.”